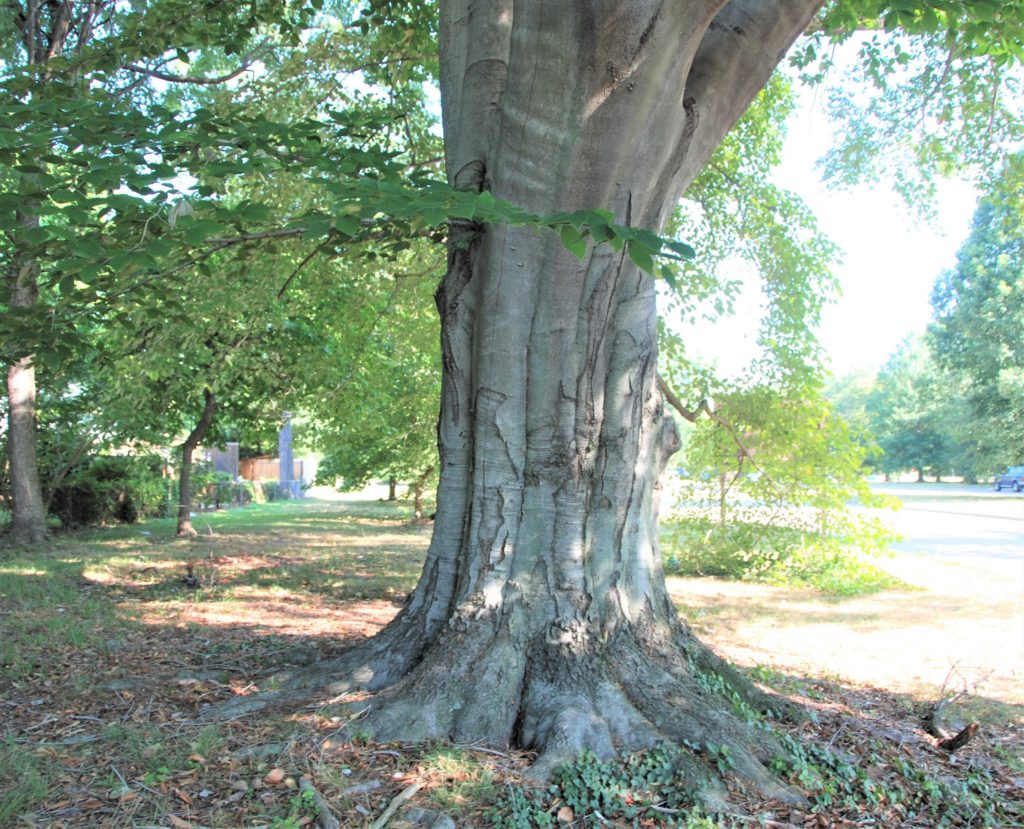 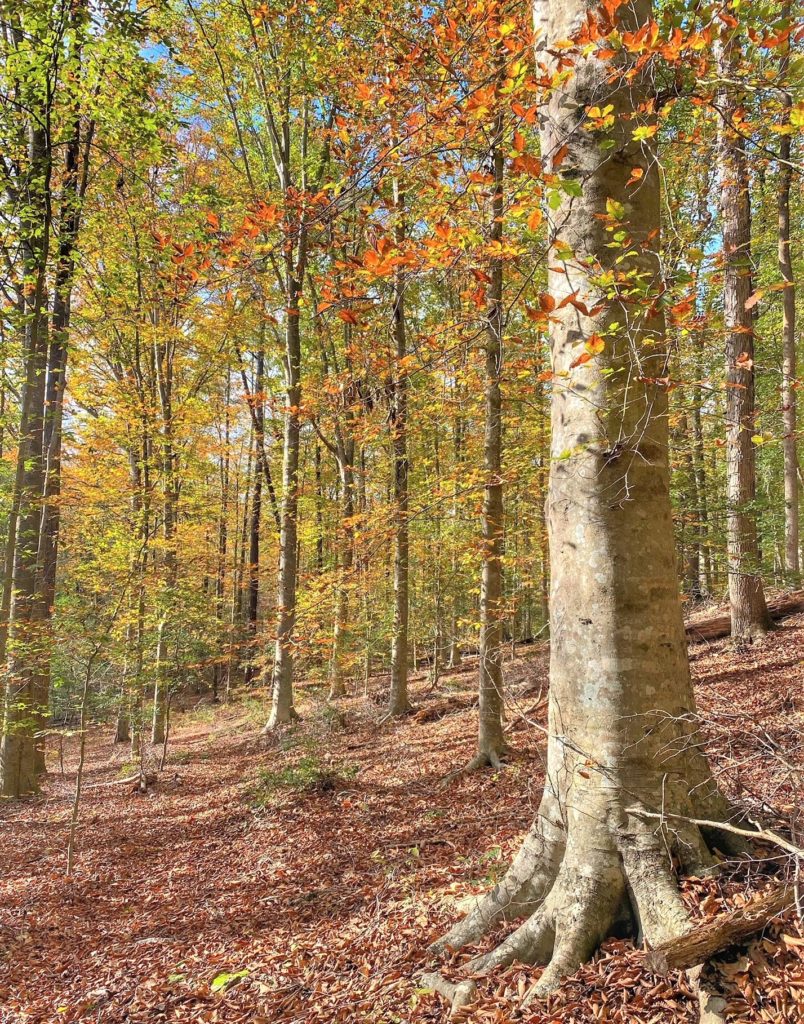 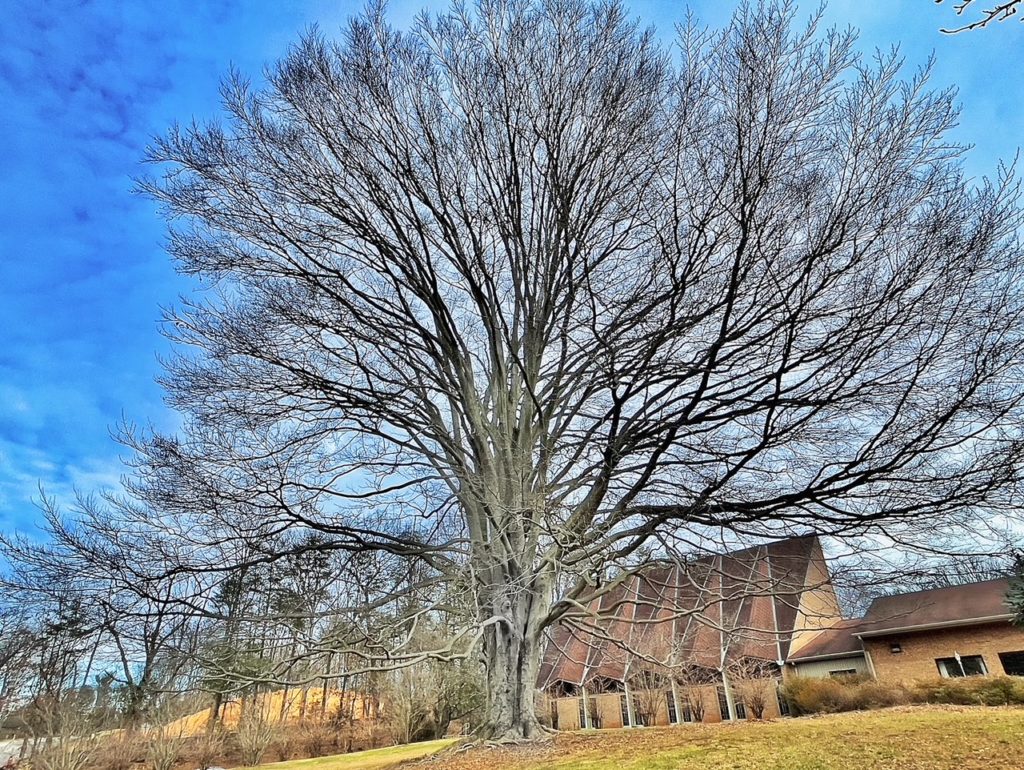 American Beech, fourth largest Beech in Virginia measuring 103’ tall and with a trunk circumference of 189”. Magnificent! Photo by Larry Golfer

American Beeches are one of our most magnificent native trees, beautiful in every season, especially winter. They are also one of the most easily recognized of our eastern deciduous trees, with their silvery gray bark that appears cast from “molten pewter”. The massive trunks appear smooth to the eye but are slightly rough to touch and sometimes likened to elephant hide. American Beeches are slow growing but reach heights of 60 – 80’ and are known to grow as tall as 120’. This tree has massive smooth trunks with fluted bases that give way to a tracery of fine silvery branches accented with rich brown narrow pointed buds. Oval leaves alternate down the fine branches and are lined with small regular teeth along the margins and distinctive parallel veins on either side of the mid-rib. The lustrous leaves are almost translucent when held up to the sun, casting a dappled light under the trees. The leaves emerge a glowing chartreuse in spring, and light up the woodlands once again in fall when they turn a rich copper which glows against the silvery gray trunks. In winter, some of the leaves curl and fade to a light parchment color and hang on the branches, especially on younger trees and on lower branches of older trees, creating a lovely contrast with the gray trunks and surrounding forest.

Beeches have a dense spreading canopy and an upright oval crown when young, but this eventually becomes wide spreading with age with massive spreading limbs and fine drooping branch tips which catch the morning dew, frost and snow. The roots are equally distinctive, extending widely from the base of the tree near the surface. In rich forests, this vast network of roots can give rise to numerous root sprouts that ring older trees, forming groves of beeches all supported by the roots of the original “Mother” tree. These young saplings get their nourishment from the Mother tree and can grow much more rapidly than on their own, eventually creating a grove of beeches in the forest. In fact an entire beech forest may actually be a colony arising from the roots of one venerable old Beech.

In spring, their small yellow-green flowers are rarely noticed but give rise to distinctive three-sided nuts held in a ½” long prickly capsule. Beechnuts have been reported as the primary food source for more than 30 species of wildlife including: squirrels, flying squirrels, chipmunks, deer, foxes, and black bears as well as many birds such as wild turkey, grouse, ducks, blue jays, grosbeaks, woodpeckers, including red headed woodpecker, and nuthatches. Many of these animals cache the seeds helping to disperse them widely. In bygone times, the abundant nuts were readily eaten by pigs who could roam free under the beech trees.  The nuts were also a favorite food of the now extinct passenger pigeon who descended to feast on them in such great numbers their weight caused massive branches to break off! The thin smooth bark was also once used for writing paper, and the unfortunate habit continues today with folks still loving to carving their initials into the smooth bark, potentially harming these long lived trees. The bark and leaves have been used historically to dye fabric and a poultice of boiled leaves has been used to treat burns, frostbite, and poison ivy and a tea made from the bark has been used to treat various respiratory ailments.

American Beeches are native from New Brunswick west to Ontario extending south to Florida and eastern Texas and are found in rich forests as well as on nutrient poor, acidic soils. In eastern Virginia, beeches are most often a canopy tree growing in the deep rich soils of ravines and lower slopes but also occur in upland forests and well drained floodplain terraces. Their thin bark once made them susceptible to the frequent fires that occurred in coastal plain forests, but after decades of fire suppression they have moved to occupy drier sites and ridges.

Michael Dirr, in his classic “Manual of Woody Landscape Plants” says, “The boat has been missed as far as the use of this tree in the landscape… young trees can be moved successfully and will establish and prosper… A beech is planted primarily for your grandchildren or posterity, although wildlife will enjoy it now and young saplings are still exceedingly beautiful”. They can be grown readily from seed or small container grown plants; however, they are difficult if not impossible to move as root suckers.  They prefer rich moist soils and will not grow in poorly drained or compacted soils. They will thrive in sun or part shade but need plenty of room to accommodate their mature size, which only becomes more magnificent with age. Little can grow beneath dense canopy or surface roots of a mature beech and they often have a natural “skirt” of drooping branches, so it is best to leave the soil undisturbed and covered with leaf litter, or let mosses and wildflowers take hold. Surprisingly, beeches respond well to pruning. Like their European cousin, they can be trained and sheared into hedges or pleached as at Williamsburg into an arched, formal framework over paths.

If you are lucky enough to have one or more American Beeches on your property, they should be preserved and protected, and if you do not have one, and have the space, consider planting one of these majestic trees and enjoy the wildlife and beauty it will bring.