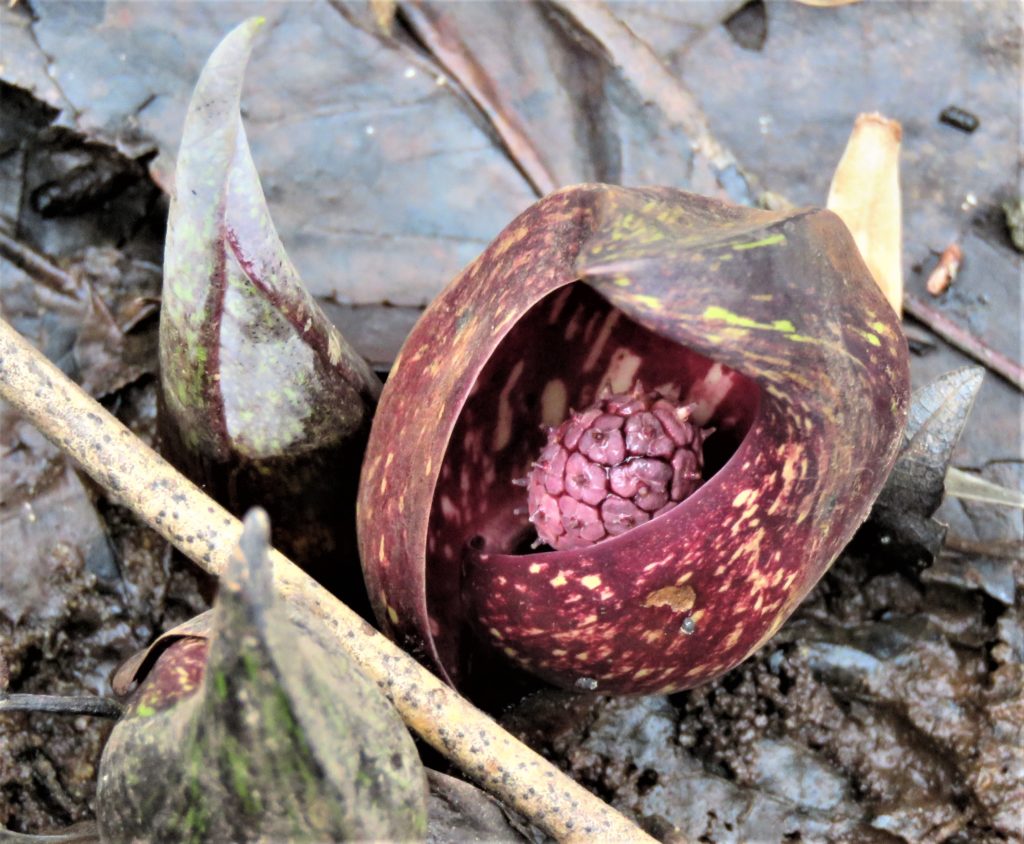 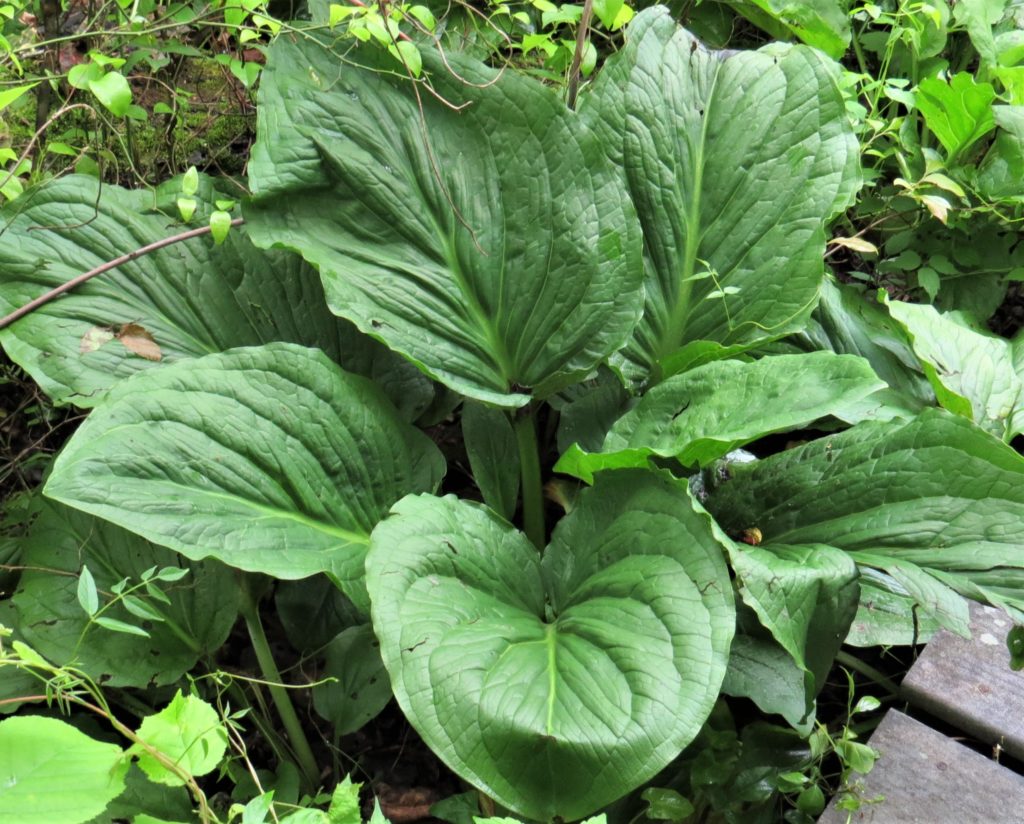 As the winter solstice approaches, I am already anticipating the blooms of our earliest spring
wildflower, Skunk Cabbage, Symplocarpus foetidus. The buds of this winter blooming
wildflower begin to appear in our region as early as December and the flowers often start to
bloom by New Year’s Day. As one might imagine for a wildflower that manages to bloom and
attract pollinators in the dead of winter, this plant has developed some remarkably interesting
adaptations to the cold and even snow cover.

Like Jack in the Pulpit, Skunk Cabbage is a member of the Arum family with an unusual flower
structure of tiny flowers borne on a club or spike-like structure called a spadix. Often the club is
partially enclosed by a colorful leaf-like structure called a spathe. In the case of Skunk Cabbage,
the flowers emerge and bloom before the leaves open beginning around New Year’s Day. The
spathe is a smooth fleshy hood and is a deep burgundy-purplish color, often with greenish
mottling. Some say it resembles carrion as the plant emerges from the snow or frozen ground.
The spathe is about 4 – 6” long with a pointed tip and a small opening on one side, and partially
surrounds the actual flowering structure inside. The spadix is knob-like and divided into raised
bumps each of which bears a tiny flower. The tiny flowers are only ¼” wide and have no petals.
Instead, the plants have unique adaptations that allow them to emerge through snow and attract
pollinators. The plant can generate heat and raise temperatures inside the spathe as high as 77
degrees even when temperatures outside are below freezing.

As you might imagine with a common name like skunk cabbage, and a scientific name like
foetidus (Latin for fetid smelling), the bruised leaves and flowers of skunk cabbage have a putrid
odor. Some say it resembles a skunk, while others describe it as smelling like a long dead animal.
This is quite an adaptation as the chief pollinators of the stinky flowers are carrion flies and flesh
flies that are attracted to the seemingly decomposing flesh odor. Besides the “alluring” smell, the
warmth inside the spathe, entices these insects in to lay their eggs thereby incidentally
pollinating some of the flowers. Once pollinated, the spadix enlarges into a compound fruit with
a blocky surface somewhat like a miniature pineapple. Each berry-like fruit contains a single
seed, which ripens and falls to the ground near the Mother plant to potentially create a colony of
skunk cabbages.

Skunk cabbages are long-lived and have massive roots with a stout rhizome that extends deep in
the soil surrounded by large masses of fibrous roots. The wrinkled roots are contractile, meaning
that they contract and pull the plant down a few centimeters deeper in the soil each year, so that
the flowers are always at or partly below ground level. These large roots also store the energy
required to raise the temperature of the flowers each winter.
Once the plants have bloomed, the leaves unfurl, and eventually grow into a showy vase-shaped
mounds of large, lush foliage, with wrinkled heavily-veined leaves that can reach 2’ long and 1’
wide. By late spring, the mature foliage creates a lush, spectacular look in the swamps and
wetlands in which they grow. No matter that they resemble cabbage, their leaves are toxic and
filled with calcium oxalic crystals that create a painful and unforgettable burning sensation if
eaten, deterring nearly all vertebrate herbivores. Curiously, recent studies have shown that Black
Bears, hungry after emerging from hibernation, will eat the new unfurled leaves which may
make up to 90% of their diet in years when oaks do not produce many acorns and food is scarce.

Despite the toxicity, the plant was used medicinally by Native Americans to treat headaches,
nervous, and respiratory ailments, and was popular and was even listed in 19 th century
pharmacopoeias as ‘Dracontium’ to treat disorders such as asthma, whooping cough, bronchitis,
and nervous disorders such as epilepsy, vertigo, and headaches.
Skunk Cabbage occurs over much of the Eastern N. A. from Nova Scotia west to Quebec and
Minnesota, south to North Carolina and Tennessee and blooms from late December through
March depending on the latitude. Skunk Cabbage, (also called Swamp Cabbage) is typically
found in shaded wetlands such as seepage swamps, seeps, bogs, and other low areas where the
ground is saturated or wet for most of the year. They prefer consistently wet, mucky soils, and
can tolerate seasonally flooded shallow water. They do not tolerate dry soils, and their beautiful
lush foliage yellows and quickly withers away by late summer, as the swamps dry out and the
plant goes dormant until the following winter. Because of their massive roots, it is extremely
difficult if not impossible to dig these plants up or move them, so they are best enjoyed in nature
in a swamp or bog or planted from seeds. If planted from seeds, they must be fresh, and never
allowed to dry out, and planted in semi-shad, mucky soils that remain consistently moist or wet.

Each year, members of the Northern Neck Chapters of the Virginia Native Plant Society,
Audubon Society and Master Naturalists sponsor a New Year’s Day walk to Cabin Swamp in
Hickory Hollow NAP in Lancaster, to look for the curious blooms of Skunk Cabbage and to get
outside and enjoy other winter flora and fauna. Because of COVID-19, this year they are going
virtual and inviting members and the public to join us in a virtual program available on the
Northern Neck Chapter, National Audubon Society website. It has trail maps and slides with
descriptions of skunk cabbage and its life history, as well as other interesting highlights that can
be found along the trail. So, grab your coat and gloves, and a copy of the trail guide, and get
outside and hunt for skunk cabbage and other wonders of the winter woods and celebrate the
New Year!  Check it out at Northern Neck Audubon Society website