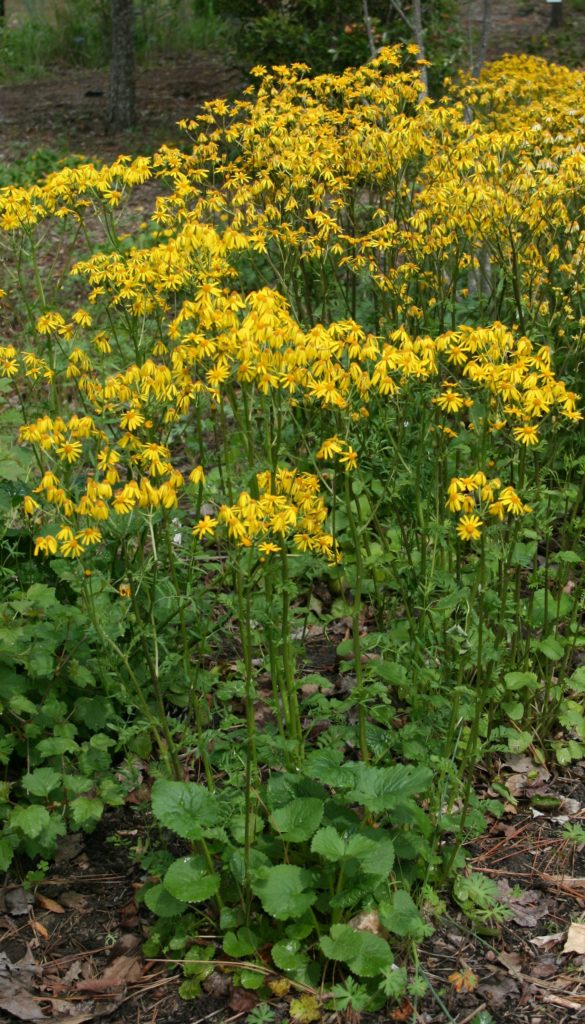 Golden Ragwort is a welcome sign of spring, covering swampy areas with bright yellow, from mid-March through early summer. The buds are purple, and open to display yellow disc and ray flowers, unusual for a member of the Aster Family — the rays are often white. This native perennial grows 1-3 feet tall, with only a few deeply cut leaves on the stems. The leaves at the base of the plant are heart-shaped, in a large rosette. After the flowers fade, these leaves spread to form a nice groundcover which will persist over most of the winter.

Growing naturally in bogs, wet woods, floodplains and meadows in eastern North America, Golden Ragwort occurs in every county in Virginia. The plant thrives in full shade with acid, rich soil, in zones 3 to 9. Because it spreads easily by seed and underground roots, it can form large colonies and will grow under trees where nothing else thrives. In a woodland garden or a perennial border in the shade the masses of golden yellow look wonderful with Bluestar (Amsonia tabernaemontana) and Red Columbine (Aquilegia canadensis).

Small bees and flies that emerge early from winter homes are frequent visitors, feeding on nectar and carrying pollen to fertilize neighboring flowers. Among the insects, the green metallic sweat bee is more easily seen than the dull brown or black cuckoo bees and hoverflies. Deer avoid Golden Ragwort since the leaves contain toxic chemicals.

Two other species of this genus are common in the Coastal Plain. Woolly Ragwort (P. tomentosa) is a plant of the dunes, sandy clearings and roadsides and Small’s Ragwort (P. anonyma) grows in dry fields, roadsides and disturbed habitats. There are differences in the stems and leaves of these 3 species, but where they grow is the best way to identify them.

Golden Ragwort is one of the herbs (ground and dissolved in alcohol) that are sold as Lydia Pinkham’s Vegetable Compound, widely marketed as a cure for any “female complaint.” A tea made from the root and leaves was used by American Indians, settlers and herbalists to treat delayed and irregular menses, leucorrhea and childbirth complications, leading to its alternate common name “squaw-weed.”
“Ragwort” means a plant with ragged leaves, and “wort” is an Old “English word for “plant”.

The best place to buy these plants are local native plant sales, since it is not usually seen in commercial nurseries. Online sites such as North Creek Nurseries sell flats of seedlings.