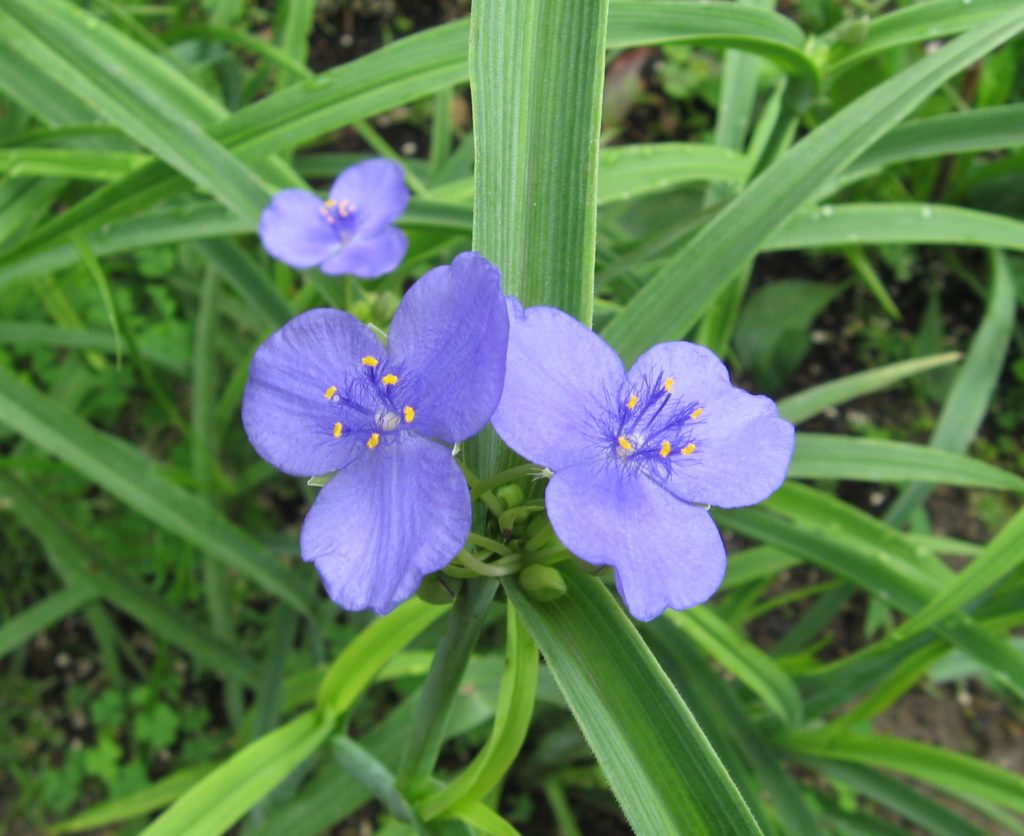 A long-blooming native perennial like Spiderwort can fit into a lot of spaces in the home garden. Three-petaled flowers form a triangle – they are violet-blue with vivid yellow stamens growing in a 3’ tall clump. Each flower is open for only a day, in the morning, but they bloom in succession from buds at the ends of stems, from April through July. The flower stems are surrounded by arching green leaves up to one foot long and one inch wide that are erect early in the season but are somewhat drooping in summer.

Spiderwort is not fussy about growing conditions – part shade, medium water, low maintenance – and tolerates clay soil, dry and wet soil. It would fit in a woodland or native garden, naturalized or as a border, along with other perennials that hide the sprawling leaves late in the season. The plant can self-seed and spread but dead-heading will prevent seed set. Spiderwort’s blue-violet flowers are attractive with yellow flowers like Green and Gold (Chrysogonum virginianum) and Black-eyed Susan (Rudbeckia hirta). Bumblebees are the principal pollinators.

Two other species of Tradescantia grow in Virginia, differing in the appearance of the leaves and flowers. T. ohiensis grows in Virginia Beach and the western mountainous counties; T. subaspera has been located in the southwestern counties. T. virginiana grows west of Richmond and some southeastern counties.

The plant’s genus name honors John Tradescant, gardener to Charles the First of England and a subscriber to the Virginia Company. John’s son traveled to Virginia in the 1630s and sent spiderwort back to England where it became part of the English cottage gardens. It is called Spiderwort because the stems when cut secrete a sticky secretion that becomes threadlike and silky as it hardens, like a spider’s web. “Wort” is an old English word for plant.

Hybrids are available in the nursery trade with red-purple, pink or white flowers.