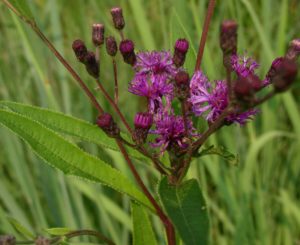 These are handsome, robust plants with stunning floral color. The sturdy stems grow three to ten feet tall and maintain an upright posture throughout the fall. Leaves are lance-shaped and finely toothed. The intense deep purple flowers bloom from late summer to early fall and are powerful butterfly magnets, especially attracting the tiger swallowtail. Skippers, moths and native bees are also seen collecting nectar from the flowers.

Ironweed is a member of the aster family that includes sunflowers, daisies and black-eyed susans. These flowers have no rays, only flowers in the central disk area.

Ironweeds are usually found in moist or wet areas of fields and streambanks. They are easy to grow in average to wet soils in full sun to part shade. To reduce the height of the plant, the stems can be cut back in mid-summer, or cut nearly to the ground in late spring. In the home garden, ironweed can grow in a rain garden, in a meadow or wildflower garden, or in the back of border plants. Hardy from Maine to north Florida, ironweed is common in all regions of Virginia. Ironweeds are usually not browsed by deer and rabbits.

Some explanations of the common name: one refers to the difficulty of pulling the plant up by the roots – battling a plant with a will of iron; another refers to the plant doing well in areas of old fires, especially with rusted metal nearby; the “iron” could describe the tall and sturdy stems or could refer to the rusty-tinged color of fading flowers and the rusty colored seeds.

Upland Ironweed (V. glauca) is a similar plant, with shorter stems and wider leaves, and grows in drier soils. The species name “glauca” refers to the whitish leaf undersides. As the flowers fade, they are replaced with bristly white hairs that are brownish in New York Ironweed.

The genus was named for William Vernon, an English botanist who collected in Maryland in the late 1600s. The species name “noveboracensis” refers to New York where the first collections may have been made of this plant. Native Americans made tea from the leaves and roots of ironweeds for relief of female problems and as a blood tonic.