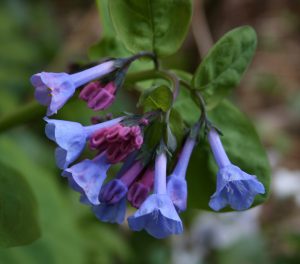 Virginia Bluebell is a beautiful spring wildflower that produces funnel-form pendant flowers beginning as pink but then turn blue as the flowers open. They are pollinated by bees that are large enough to push their way up the tube, and more commonly by butterflies and moths.

This native perennial is a spring ephemeral – the leaves first appear in March as deep purple, quickly turning green. They are large, 2-8 inches long and somewhat fragile as the stems are nearly hollow. Clumps grow up to 2 feet tall and go dormant by early summer after the flowers fade and seeds are formed. With no remnants of the plant remaining, it’s easy to assume it is gone, making the mistake of digging and planting in the same location. Installation of other shade-loving perennials should be done while the plant is still visible. A stunning combination for the spring is with yellow daffodils and pink tulips. Native ferns, Solomon’s Seal, trillium, and Foam Flower would work well also.

It’s difficult to move these beautiful plants. Small seedlings can be transplanted, but they will take several years to bloom. Mature plants have a long taproot and once established, they don’t like to be moved. If necessary larger plants can be moved when dormant, into areas with abundant moisture. Bluebells have few pests and deer don’t bother them.

The natural range of Virginia Bluebell is New York to Michigan, and south to Alabama and Missouri.  It is a plant of Virginia’s mountain and piedmont areas, rather than coastal regions, so it must be given a moist, shady environment.

Early on this lovely flower made the trip to Europe, where it quickly became a regular in English gardens.  William Robinson, writing in “The English Flower”:  “…handsomest of all is the Virginia cowslip.  It is a charming old garden plant, and one which unfortunately has never become common.”

The genus is named in honor of F.K. Mertens, a professor of botany at Bremen, and the species honors Virginia.