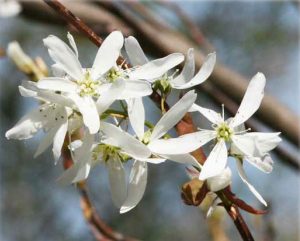 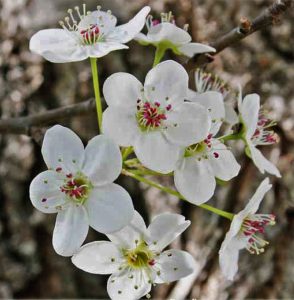 Soon spring will come with flowering fruit trees—serviceberry, pears, apples, cherries—all members of the Rose family, so the flowers look quite similar, with 5 white or pink petals and many stamens in the center.

First to bloom is serviceberry, a somewhat crooked small tree or shrub with slender flower petals. When flowering begins, the leaves are still folded, only about half-grown, and covered with a fine, soft gray fuzz; later the leaves are smooth and dark green. The flowers produce many small, red, sweet and juicy fruits resembling tiny apples, often well-hidden by the leaves. These fruits would be popular with people were they not so quickly consumed by birds and other wildlife.Two species of Amelanchier grow in the Coastal Plain, distinguished by the sepals that are erect and spreading in A. canadensis or curved downward in A. arborea. Early colonists noticed the tree blooming when the shad were running, hence one of its common names, shadbush. It was also known as “serviceberry” since the local ministers could visit winter-bound homes as the roads became passable, performing weddings and funerals and other services. However, in our area, serviceberry has been largely replaced by the introduced Bradford or Callery pear, Pyrus calleryana. This tree has a distinctive pyramidal shape covered with dense clusters of white flowers. Appearing before the leaves, the five-petaled flowers cover the tree in abundance, although many people find the odor of the flowers unpleasant. Flowers pollinated primarily by flies, not bees and other insects, always have a fetid smell.

Much has been written about the invasive character of Bradford pear. Native to China and Vietnam, it was named for the Chinese scholar Joseph-Marie Callery, who sent specimens of the tree to Europe from China. The species first came to this country in 1909, and in 1916 the U.S.Department of Agriculture brought in the plant to try to combat fire blight, which was devastating the commercial pear industry. Initially used as rootstock for common pear, it quickly became interesting as an ornamental. Various cultivars from China were also introduced and grafted onto rootstocks, and the cultivar ‘Bradford’ is one of the results.

Blossoms of Serviceberry (left) and Bradford Pear (right) Originally bred to be sterile, Bradford pear is now cross-pollinating with other pears, subsequently producing fruits and seeds that are relished by birds, which spread the seeds in their defecations. They grow in dense populations, especially in disturbed areas and along roadways, and are displacing native trees. This tree grows quickly, to fifteen feet in ten years, but the crown is dense and the branches are long, making it susceptible to damage by wind and ice damage. The tree will split, fall apart, or uproot in strong winds or heavy ice. Because this tree does not have a long life, is damaged by storms, and outcompetes native species, it should not be planted in any residential or commercial landscapes. Unfortunately, nurseries offer the plant for sale, and many developments, seeking to enhance their entrance-ways will plant the tree in rows along the median.

Serviceberry and pears bloom in March through early April and can be separated by (1) somewhat straggly appearance of the trunks of serviceberry. and (2) the pyramidal shape of Bradford pear and the unpleasant odor of its flowers.  Apples and cherries bloom a little later, in late April or May. Southern crabapple, Malus angustifolia, is native in the Coastal Plain and the introduced Common Apple, Malus pumila, has been cultivated and is now widely naturalized across the state. Apples and cherries can be separated by their tree trunks—on cherry trees the bark is dark and shiny with horizontal lens-shaped spots (lenticels), whereas the bark of crabapples is light-colored and the branchlets are thorny.

These 4 genera—serviceberry, pears, apples, and cherries—can be separated also by flower structure. Apples, pears, and serviceberry all have inferior ovaries, closely surrounded by other tissues; the ovary becomes the core of the fruit and the part we eat is derived from the fleshy flower cup that adheres to the ovary as the fruit develops. The dried remnants of the flower—tips of sepals, stamens and pistils—can often be seen at the top of apples and pears, opposite the stem.  Among these 4 genera, only the cherries (Prunus sp) have superior ovaries, that is, when the flower is dissected, the ovary can be seen free at the bottom of the flower.
There is no scar at the top of cherries, nor central core, since the superior ovary alone becomes the fleshy fruit we eat.

Many cultivars of these blooming fruit trees are widely planted for their spring flowers and colorful foliage. In autumn the native serviceberry shows a variety of colorful hues, from yellow and gold to orange and deep red. This plant is striking when placed in a mixed shrubbery border where its brilliant white blooms and fall color stand out nicely against a background of evergreen shrubs.