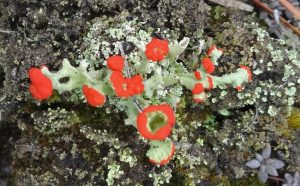 A bright spot in the woods and meadows in winter is this little lichen with the red caps, named for the red uniforms of the British soldiers during the Revolutionary War. The surrounding material is gray-green, a color characteristic of lichens, reflecting their dual lifestyle. A green alga Trebouxia erici supplies nourishment by its photosynthesis while the fungus, Cladonia cristatella furnishes necessary water and nutrients.

Lichens are not plants, but an association, often called “mutualism” of two, and sometimes three different organisms. Often gray-green in color, their growth form can be shrubby, as is this species, leafy, or crusty, among others. Certain lichens live on leaves, as parasites. Sexual reproduction is by spores, formed in ascospores, the red caps of this species, and bowl-shaped structures in other lichens. They reproduce asexually when a fragment is broken from the main body, and by producing microscopic, dust-like particles distributed by the wind.

These are extremely important organisms ecologically. They can transfer nitrogen from the air to the soil in a form usable by plants, they break down old wood, returning nutrients to the soil, and can grow on bare rock, eventually dissolving the rock and creating minute bits of soil. Very sensitive to air pollution, a lack of lichens in an area indicates an unhealthy atmosphere.