Southern Magnolia is a magnificent tree of the South, densely covered with leathery, dark green, evergreen leaves. They are shiny on top and velvety brown underneath, much used in December for holiday decorations. Very large, very fragrant creamy-white flowers appear from spring and occasionally through summer. The flowers are 5 inches wide, usually with six thick petals, slightly cupped at the tips. Cone-like seedpods follow the flowers with large red seeds.

This handsome tree grows a straight trunk and conical crown and can get quite large, over 60 feet tall and 40 feet wide, so it needs a lot of space. Southern Magnolia is often planted as a lawn specimen when the lower branches are allowed to reach the ground. The tree grows best in rich, moist soils in part shade. It does not do well in extreme wet or dry soils and should not be planted near pavement because the roots can lift and crack concrete.

Few trees can match its year-round beauty. Deer do not bother Southern Magnolia, it has few pests or diseases, and is salt tolerant. The leaves can be a nuisance since they fall throughout the year and do not decompose. They can be chopped with a mower and sent back under the branches to recycle the nutrients.

Southern Magnolia is not really native to the southern Coastal Plain in Virginia but has been planted extensively throughout and frequently escapes into local woodlands and moist bottomlands. Dr. Stewart Ware says: “The northern limit of the natural range of southern magnolia when Bartram did his explorations was at the South Carolina/North Carolina border. But as soon as colonists began to introduce it into various places in North Carolina, it began to reproduce as birds spread the seeds. Presumably that means that the northern limit in colonial days was not solely climate, but was a combination of climate, transport, and competitive interactions.” The growth rate is slow – over the past 40 years, Dr. Stewart Ware has watched seedlings in the College Woods that are not over four feet tall and have never bloomed. 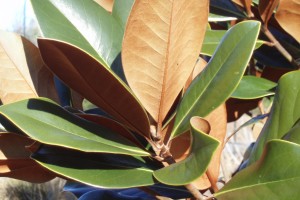