Wildflower of the Month – November 2018

Distinctive warty, cork-like ridges cover the smooth gray to light brown bark of Hackberry. The form is that of a shrub, with several woody stems growing from the base; the crown is rounded, and the branches spread and droop slightly.

The leaves are long-pointed and alternate on the stems. They have coarse teeth and mostly uneven bases and are rough on the surface, about four inches long.  Another species, C. laevigata, has subtle differences in the leaves; the Flora of Virginia states that the distinction between the two species “is problematic in Virginia.”

In early spring, inconspicuous yellowish-green flowers appear in small clusters, followed by small, orange to purple fruit on stalks at the leaf bases. Flowers bloom in April and May and fruits follow from October through November. Five species of butterflies, including mourning cloak, visit the flowers for nectar and many birds love the sweet, ripened fruits, often called “sugarberries.”

Common Hackberry grows in moist soils, usually along streams, and also in forests, meadows and fields. Growing naturally in most counties of Virginia, the range is from Canada south to Virginia and west to Oklahoma.  Hackberry is a good landscape choice since it grows rapidly, can resist strong winds, tolerate air pollution, provide erosion control and doesn’t require watering.

Hackberry is a member of the Cannabaceae, the Hops or Hemp Family, with 11 genera distributed worldwide. Economically important species are Humulus (Hops), Cannabis (Hemp) and Celtis (Hackberry), that can be cut into lumber for furniture and containers. 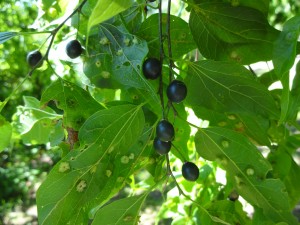 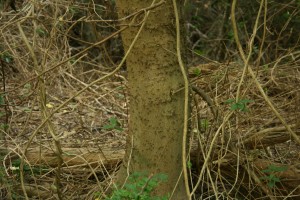 The common name apparently was derived from “hagberry,” meaning “marsh berry,” a name used in Scotland for a cherry. Small galls often produce tiny bumps on the leaves that are harmless to the tree and can be used to help identify the species. Contorted twig clusters called “witches’ broom” are often at the ends of branches. Produced by mites and fungi, they do little harm to the tree but can be unsightly. Some gardeners prefer cultivars that are resistant to witches’ broom for landscape use.

Native Americans used the hackberry for medicinal purposes as well as for food. The fruits (drupes) are sweet and sugary but with a hard stone that is rich is protein and fats. Survival manuals recommend crushing the entire fruits to a paste, then toasted into a bar.