I became fascinated by bryophytes (liverworts, mosses and hornworts) several years ago, so when the VNPS conference offered a field trip on Ferns and Mosses at Freedom Park, I jumped at the chance.  I had already met two of the attendees online (as members of the Facebook group “VNPS Ferns Mosses and Lichens”), so I knew I was in good company.  The trip was led by Helen Hamilton (also a member of the Facebook group) and included nine eager participants.

As we stepped out of our cars, Helen immediately pointed out Goblet Moss (Physcomitrium pyriforme) growing under our feet between the paving stones and curbs.   She shared that goblet moss is mostly a spring ephemeral (and occasionally fall).  Unfortunately, right next to the parking area was a patch of invasive Beefsteak Plant (Perilla frutescens), a member of the mint family Lamiaceae.

We walked past the GoApe Treetop Adventure Course, looking at various lichens, mosses, and ferns along the way.  We spotted Christmas Fern (Polystichum acrostichoides), which has fertile tips of the fronds are much smaller than the non-fertile parts.  The fern moss (genus Thuidium) we saw has a leaf structure similar to ferns, hence the common name.

Descending to a small streambed, we found Worm Moss (Bryoandersonia illecebra) with its many ascending parts that look like small green worms stretching up above the surface.  Tree Skirt Moss Anomodon attenuatus seemed to be growing up around nearly every available tree trunk.  There was some confusion over a vine growing up a tree that had suspicious poison ivy-like aerial rootlets, but looking up we quickly determined that it was something else, later identified as Climbing Hydrangea (Decumaria barbara), a.k.a., Woodvamp., a native to this coastal part of Virginia.

Passing by patches of Broad Beech Ferns (Phegopteris hexagonoptera), we made our way to a rotting log on the forest floor that was covered with a light green coating of Rustwort, the tiny liverwort Nowellia curvifolia.  Helen explained that on downed trees, those logs with retained bark would likely have moss growing on them, but this liverwort is commonly found on trees that have lost their bark.

We then spotted a Chain fern (Woodwardia areolata) near the stream and Hook Moss (Forsstroemia trichomitria) and Frullania spp. liverworts growing on the sides of trees. Healthy patches of Woollywort (Trichocolea tomentella) are along the sides of the stream, and elsewhere throughout the ravine.  This plant looks like moss, but no, it’s a liverwort, as examination under a lens reveals its hair-like, liverwort-leaved structure.

Working our way up the hill to another small ravine, Helen brought us to a site with yet another liverwort, Pallavicinia lyellii (no common name).  With lenses, we could clearly see the male (antheridia) and female (archegonia) structures growing from the green thallus gametophyte parts of the liverwort.

On the return path, we discovered a nice group of Lily-leaved Twayblade (Liparis liliifolia) in fruit, growing near several Nuttall’s Lobelia (Lobelia nuttallii).  We finished up with some Brocade Moss (Hypnum imponens) before making our way back to our cars.

I know I missed some of the many IDs that Helen pointed out on the trip, but I was struck by how many of the liverworts (and ferns) she pointed out were the same ones I had discovered in Bull Run Mountains Natural Area Preserve in Prince William and Fauquier counties.  It’s nice to know that when you start to pay attention to the small things in nature, you can rediscover old “friends” no matter where you go! 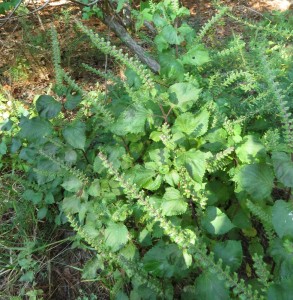 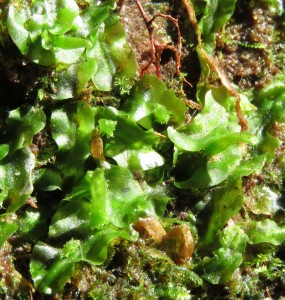 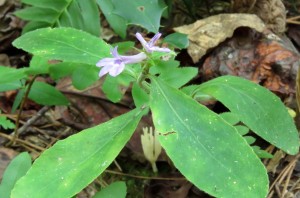 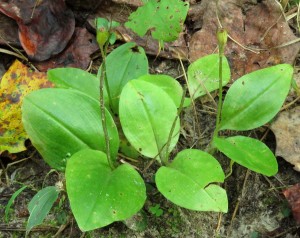