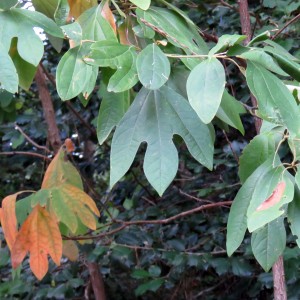 This tree is unique for its three distinctive leaf shapes: entire, mitten-shaped, and three-lobed, all on the same tree. In mid-April little bunches of yellow-green flower clusters are scattered profusely over the tree, drooping as the leaves emerge.  The green twigs, bark and leaves carry aromatic oils – spicy-fragrant when crushed or rubbed.   Round fruits appear in mid-summer, turning dark blue on scarlet stalks; the leaves have outstanding color in the fall.

Sassafras is a moderately fast growing, small to medium-sized tree, valued for fragrant spring flowers, horizontal branching pattern, and striking fall color. It requires little care and can be a single specimen tree or planted in masses.

Found on virtually all soil types, Sassafras is native to every county in Virginia, its range extending from southern Maine to Michigan and Missouri, and south to Florida and east Texas.  It is a pioneer species on abandoned fields, along fence rows, and on dry ridges and upper slopes, especially following fire, often forming thickets from underground runners of parent trees, but grows best in open woods on moist, well-drained, sandy loam soils.

The bark, twigs, and leaves of sassafras are important foods for wildlife in some areas. Deer and rabbits browse the twigs in the winter and the leaves and succulent growth during spring and summer. Fruits are eaten by songbirds.

The durable coarse lumber was once used for barrels, buckets, posts, and fuel.  The greenish twigs and leafstalks have a pleasant, spicy, slightly gummy taste.   Aromatic oils in the roots and bark of sassafras have been used in many medicinal and cosmetic products.  Explorers and colonists thought the aromatic root bark was a panacea, or cure-all, for diseases and shipped quantities to Europe. Sassafras roots provided the original flavoring for root beer, and were used until 1960, when certain compounds in the roots were found to be carcinogenic.  Root beer is now flavored artificially.

Sassafras apparently is the American Indian name used by the Spanish and French settlers in Florida in the middle of the 16th century. This is the northernmost New World representative of the laurel family, an important source of tropical timbers.