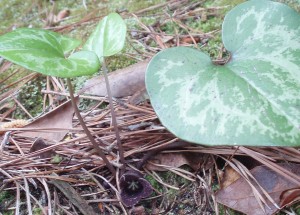 The gingers growing in the woods in our area are not related to the ginger root sold in stores. Garden ginger (Zingiber officinale) is native to Southeast Asia, China, India and New Guinea and is grown worldwide for uses as food and medicine. Information is available online about how to grow your own ginger plant in the home garden, using the knobby roots from the grocery.

Two species of ginger are found in our local woodlands, one is deciduous, the other evergreen. The kidney-shaped leaves of Wild Ginger (Asarum canadense) are deciduous.   They are soft to the touch, densely short-hairy, evenly green, and grow in pairs.  Since it spreads via long rhizomes, Wild Ginger sometimes grows in dense stands.   The heart-shaped leaves of Heartleaf Ginger (Hexastylis virginica), in contrast, are leathery, lustrous, and evergreen.  Each plant produces only one leaf each year, rather than a pair of leaves.  They are often mottled with silvery veining and can develop a purple tinge in winter.  They grow as single leaves, rather than in pairs.

The rootstocks and sometimes the leaves (depending on rainfall) of both species have a ginger-like aroma and a hot spicy taste.  The flowers of both are “little brown jugs”, growing beneath the leaves and hugging the ground (often hidden beneath leaf litter).  They are pollinated by gnats, beetles, and the flies of March and April.

Wild Ginger is widely distributed in the eastern and central U.S., but Heartleaf Ginger is restricted to the southeastern states, ranging from Virginia and North Carolina westward to eastern parts of Kentucky and Tennessee.  Both gingers are widely distributed throughout Virginia, but they grow in markedly different soil types.  Wild Ginger thrives in nutrient-rich soils, such as those found in calcareous ravines in the Coastal Plain; Heartleaf Ginger typically grows in acidic soils of moist to dry upland woods.

You can test the identity of a wild ginger by probing just below the ground with a finger and scratching the rhizome. A ginger-like smell on your finger will be proof. Native Americans and early settlers used the rhizome to flavor foods much as real ginger is used. There are numerous accounts of Native Americans using wild ginger to protect those who ate spoiled meat or food that might be poisoned.  The plant has been shown to have certain antimicrobial properties, supporting early reports of its medicinal properties in the treatment of digestive disorders, to produce abortion, to reduce fever and for coughs and sore throats.

The genus “Hexastylis” is named from the Greek “hex” for six and “stylus” for style, referring to six distinct styles in a flower (in contrast to a single style with six lobes in Asarum.)  For many years taxonomists have differed on whether the various species of evergreen gingers should be recognized as a separate genus (Hexastylis) or treated as species of the genus Asarum. That dispute continues today.  Some recent data lends support to their separation into two genera, and both names appear in the Flora of Virginia.

To grow gingers in the home garden, provide a good, humus-rich soil in full or dappled shade.  Propagation is by division in the spring, root-cuttings, and seed.  Gingers are great ground covers under shrubbery or along woodland pathways, and they can withstand dry conditions.