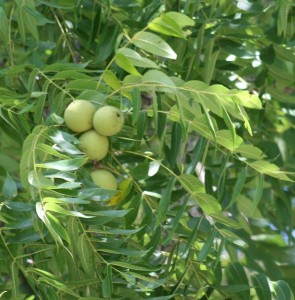 Black walnut (Juglans nigra) is one of our most valuable and beautiful native trees.  Before extensive colonization Black Walnut was a dominant canopy species, reaching 150 feet or more in height. But clearing for agriculture, harvesting for export to Britain, and making railroad ties, log cabins and cabinets greatly reduced the species.

This tree is native to 32 states, more common in lower elevations and concentrated in eastern U.S.  In nature Black Walnut grows in hardwood forests on moist, well-drained soils. These trees are often found around old homesites where they were planted for their tall, stately growth and broad canopy for shade. The leaves are dark green, turning yellow in autumn, and when crushed, have a spicy scent. Small greenish catkins are the flowers that appear in April, as the leaves are beginning to unfurl.

The compound leaves have 9-21 long, pointed leaflets, with finely toothed margins. They look somewhat similar to the leaflets of the introduced Tree of Heaven Ailanthus altissima but those leaves are coarsely toothed with a small lip near the insertion. Black Walnut can be distinguished from hickories by its distinctive leaf scar that is notched with a U-shaped bundle scars in the middle, often described as a “monkey face.”

The wood is exceptionally beautiful with a darkly patterned grain, and is highly prized for furniture, veneers, interior finishing. Other parts of the tree have a variety of uses, especially the delicious nuts which are, unfortunately, covered with an extremely hard shell that is covered by another impossibly thick husk. The hulls will soften over time, and the nutmeats can be harvested by hand, with a chisel and hammer, or with commercial products. Black walnuts have higher concentrations of beneficial fatty acids and protein than the English walnut that is more commonly sold in stores.

All parts of Black Walnut produce the chemical juglone that inhibits metabolic activity in many plants. The chemical is produced in roots and dissolves out of the leaves during rains, washing down to the ground below. While some plants cannot tolerate exposure to juglone, many trees, shrubs and perennials can be grown nearby with no ill effects. According to Doug Tallamy in Bringing Nature Home, the most sensitive plants are alien ornamentals, with no evolutionary experience with juglone. For a list of juglone-resistant plants, see “Landscaping and Gardening Around Walnuts and Other Juglone Producing Plants,” PennState Extension website, www.psu.edu.

The bark and leaves have been used medicinally, and have been especially useful treating skin diseases. The bark has been chewed to help with the pain of a toothache, and a bark infusion was taken as a laxative, among other uses. The chemical is highly toxic to many insect herbivores and can be a natural pesticide. Native Americans used the green hulls of the nuts as a fish poison.

Black Walnut, along with hickories, are excellent wildlife trees – their leaves host over 100 species of caterpillars and moths, important food source for birds. The nuts feed mice, voles, and squirrels over the winter, and these animals are food for larger ones, passing energy up the food pyramid. And since squirrels don’t always remember where they buried their nuts, sprouts of Black Walnut will appear in new habitats.