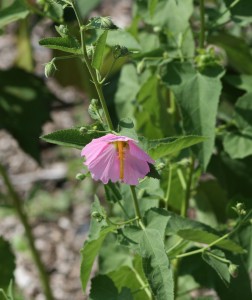 Seashore Mallow (Kosteletzkya virginica) is a very showy plant with profuse display of pink and yellow flowers that bloom at the ends of stems or in leaf axils. Open during the day, the petals close at night.   The flower looks like hibiscus, but they are much smaller and a deep pink.  A single plant can have hundreds of 3-inch flowers, normally blooming July through October.  In wet summers, seed pods will form earlier.

As in other members of the Mallow Family, the stamens are fused into a yellow central column.  The gray-green leaves are egg-shaped, pointed, and usually with triangular lobes at the base.   Lower leaves are maple-like with 3-5 lobes.   The erect, branching stems are 1-3 feet tall.

Growing in full sun in brackish marshes, wet meadows, swamps and shores, Seashore Mallow occurs only in the Atlantic coastal and tidewater counties of Virginia.  Moderately salt tolerant, the plant prefers sand and soils with high acidity, but will tolerate clay habitats.   These plants prefer mucky soils, but will grow well in garden soils that are regularly irrigated, as in rain gardens. They work well in beds with sunflowers, grasses, and goldenrods.

With a long, tubular flower, Seashore Mallow attracts butterflies and hummingbirds to collect nectar. So characteristic of native coastal flora, our sister native plant chapter in South Hampton Roads selected Seashore Mallow as their floral logo. The genus was named for Vincenz Kostelezky, 1801-1887, a Bohemian botanist.

Seashore Mallow belongs to the Malvaceae, a family with most members in the American tropics. The European marsh mallow Althaea officinalis has a pasty root that was the original source of the candy “marshmallow.” But the most valuable member of the family is cotton (Gossypium).