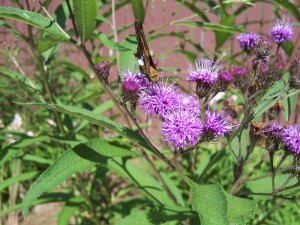 A handsome plant, New York Ironweed (Vernonia noveboracensis) can grow really tall, up to 10 feet, but the sturdy stems usually keep the plants upright during the blooming season, July through September.  Brilliant, deep purple flowers at the top of the plants are regularly visited by nectaring insects, especially the Eastern Tiger Swallowtail and other large butterflies. Long, lance-shaped leaves have fine teeth all along the edges.

Occurring in nearly every county of Virginia, this native perennial occurs throughout the U.S. east Coast, in moist or wet areas of fields and stream banks. Preferring moist soil in full sun, it works well in a rain garden but will tolerate some dry periods.  This plant requires little care in the home garden and will grow in somewhat drier sites in a border or native meadow garden with sunflowers, asters, and blazing star.
Like Joe Pye Weed, Ironweed has no ray flowers.  The dense flower heads of composed only of disk flowers, where insects can gather much nectar in a short period of time.

The common name could refer to its tough stems, or the rusty colored older flowers and seeds. The genus was named for an English botanist who collected plants in Maryland in the late 1600s; noveboracensis means “of New York.”