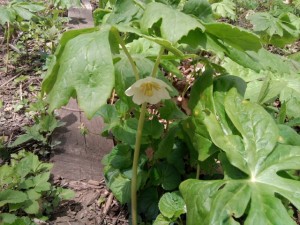 “Umbrella Plant” is another name for Mayapple (Podophyllum peltatum) because it has large leaves that spread widely from the center, overlapping neighboring leaves to form a canopy. Hidden underneath are small white flowers – early insects visiting the flower for nectar also carry pollen from the yellow stamens or neighboring flowers. The fleshy, egg-shaped fruit replaces the flowers in mid-summer, carrying seeds that will distribute the plant in surrounding areas.

Mayapples are easy to grow in good garden soil in shade and in sun with rich, organic soil and a little moisture. Creeping slowly by rhizomes, these plants can be a superb groundcover, covering problem areas of bare earth, and on slopes where erosion is a problem. Sometimes after periods of rainfall in midsummer, the Mayapple leaf becomes spotted with orange-yellow spots, from a fungus. There is no treatment and the plants quickly recover.

By mid-summer a fleshy, yellowish egg-shaped fruit about two inches long appears, again hidden by the leaves. The fruit is edible when ripe, but all other parts of the plant are toxic. Native Americans and early settlers were well acquainted with the medicinal qualities of the root that is highly cathartic, and used the plant to treat various illnesses. Researchers have identified a chemical in the roots that affect cell division; derivatives have been used in chemotherapy against several cancer types.

Long grown by southeast gardeners, this perennial has a long history, going back to Linnaeus (Swedish botanist responsible for our two-name system) who named it. Supposedly he saw resemblance between the leaf and a duck’s foot and so called it “foot-leaf”, podo being Greek for “foot” and phylum meaning ”leaf”.