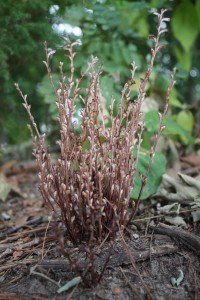 Through most of winter and into spring slender brown stalks of Beechdrops (Epifagus virginiana) can be seen around beech trees. This is the remains of a flowering plant that is parasitic on beech trees, sending tiny strands into the roots of the tree to absorb water and nutrients. No harm is done to the beech tree, since beechdrops is an annual, dying at the end of the growing season.

The new plants start to grow from seed in late summer, becoming mature and blooming from August through November. There is no chlorophyll in the leaves that appear on the stems as dry, brown scales. In late August tiny white tubular flowers, delicately marked with brown-purple stripes appear near the top of the stems. These flowers produce nectar that attracts some insects, but pollination probably does not occur. Lower on the stems are tiny, bud-like flowers that self-fertilize and produce abundant seeds inside small brown capsules. By the end of the year the plant is dead but dried stalks persist into spring.

These interesting little plants grow in dry woods in every county of Virginia, and throughout eastern U.S. The plant is well-named, Epifagus derived from the Greek epi, meaning “upon,” and phagos, “the beech.”

A tea made from the fresh plant was once used for diarrhea, dysentery, mouth sores and cold sores. Also known as “cancer root,” the plant was used in folk medicine as a cancer remedy, but recent tests for anti-tumor activity proved negative.