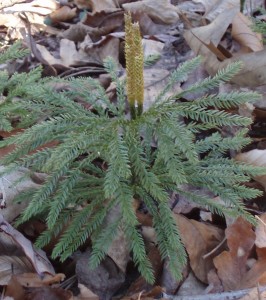 Often used in holiday decorations, Ground Pine (Dendrolycopodium obscurum) somewhat resembles a tiny, thickly branched pine tree with oversized cones. A perennial which stays green all winter, the erect stems grow to 12 inches tall; the plant propagates from extensively rooting, deep-creeping rhizomes. The linear leaves are dense and sharp-pointed. Ground Pine is distinguished from other tree-like clubmosses by round branches and pine-like rather than the flattened and cedar-like branches of running cedar and other species.

Ground Pine reproduces by spores which are clustered in single, stalkless cones at the stem tips. The underground sexual phase which produces the sex cells alternates in the life cycle with the spore-producing plant, the above-ground form.

Found in moist sites in woods, thickets and clearings in nearly every county in Virginia and cool, northern forests in North America and Asia, Ground Pine prefers acid soil and cool temperatures. The plant tolerates low nutrients and can withstand a wide range of light conditions. In general, if temperatures become warmer and the forest becomes drier, this species would be expected to decrease.

The species of Lycopodium, often split into several genera, are seedless plants representing a division of the plant kingdom called Club-mosses. In the Paleozoic era (about 300 million years ago), the ancestors of modern club-mosses reached gigantic proportions. These huge plants, some up to over 100 feet tall, formed a major part of the plant material that developed into coal beds.

The ground-pine gets its name from its resemblance to a miniature coniferous tree. The genus name Lycopodium is from the Greek lycos, ‘wolf’, and podus, ‘foot’, after a fancied resemblance of club-moss plants to a wolf’s paw.

Club-mosses have been boiled in water to make a medicinal tea that was cooled and used as an eye wash. At one time, fresh plants were put on the head to cure headaches and worn on clothing to ward off illness.

By Helen Hamilton, president of the John Clayton Chapter, VNPS