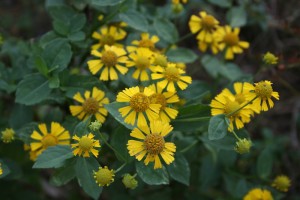 Golden, daisy-like petals surround the round, yellow centers of this late summer perennial (Helenium autumnale). The common name is misleading—the plant isn’t a weed, and it doesn’t cause sneezing, since the pollen is too heavy to be carried by wind. Some Native American tribe members dried the leaves and used them as snuff to cause sneezing, which was supposed to rid the body of evil spirits.

Common Sneezeweed is highly desirable in the fall garden and stunning when paired with purple flowers such as asters and blazing star (Liatris spp.). This local native is easily grown in rich, moist soils in full sun. It grows 2–5 feet tall on erect stems, with lance-shaped leaves arranged alternately on the stem, each leaf base continuing down the stem as a wing. The plant can require staking, but can be cut back in early summer to force shorter and more-branched flower heads. Clumps can be divided every few years to maintain vigor and provide new plant starts, or seeds can be collected.

Like other members of the aster family, the showy ray flowers look like petals, with the disk flowers in the center containing nectar and pollen. The centers of Common Sneezeweed are ball-like and surrounded by fan-shaped, drooping “petals,” each ending in three teeth, which distinguishes this species. Flowers appear in September, and some isolated plants are still producing blooms in November. After the petals fall, the striking round centers which remain provide winter interest in the garden and can be collected as additions to flower arrangements.

Sneezeweed is attractive to many species of insects; most late butterflies and bees are seeking nectar, and some feed on its pollen. It is a highly desirable pollinator plant, providing food for honeybees, many native bees, wasps, and beetles—all late-season insects preparing for survival over the winter.

Although the straight native species will draw more native butterflies and other insects, many cultivars are available from garden centers and nurseries. Hybrids appear in autumn colors of golden yellow, flame red, orange, russet and their centers can vary from deep red to chartreuse.