Easily recognized in summer and fall by their daisy-like flowers, the genus Aster represents over 250 species, most of which botanists have re-categorized into other genera such as Symphyotrichum and Eurybia. Like milkweeds and most goldenrods, asters do not need to be pampered other than providing good drainage and full sun, and they can tolerate some shade. Some are branching and sprawling, others tall and still, forming big clumps. Propagation is usually by division, either in spring or fall. There are many cultivars and color forms in garden centers, and they are great cut flowers.

Planted in drifts either in the border or in the wild garden, with the smaller types used as edging, asters should be in every gardener’s collection. They even succeed in a rock garden and make especially attractive combinations when mixed with ornamental grasses, also blooming in late fall. Seen most often along woods edges and roadsides, asters bloom late in the season, and furnish food for insects preparing for winter. 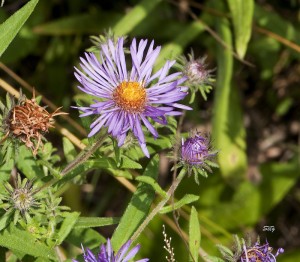 New York Aster (Symphyotrichum novi-belgii) is a stunning plant in late fall, the violet-blue ray flowers with yellow or reddish disk flowers, contrasting with blooming goldenrods. A definitive characteristic is the whitish green bracts under the flower heads with spreading or backward-curing tips. The species name is Latin for “of New Belgium”, which was the early name for New York. 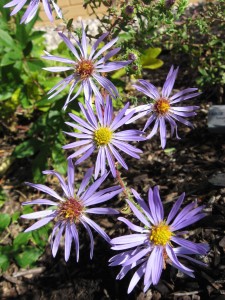 Large-flowered Aster (Symphyotrichum grandiflorum) is well named as the flowers are almost two inches wide. It grows wild only in the Piedmont and Coastal Plain of Virginia and the Carolinas. 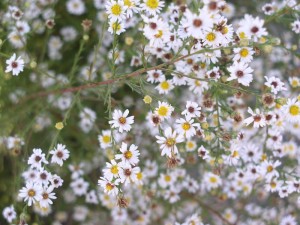 Frost aster (Symphyotrichum pilosum) blooms late – from September through November, and even into December. The flower heads are yellow when young, and later become reddish, so one plant has flowers of various colors. Since this is one of the last plants to have flowers before a heavy frost, it is an important source of pre-winter nourishment for many insects.