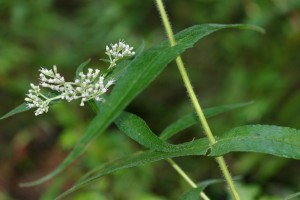 Boneset gets its name from the long, lance-shaped leaves that are paired and fused on the stem, without petioles.  Because the stem appears to be growing through the leaf, early herb doctors wrapped its leaves with bandages around splints, thinking the plant would be useful in setting bones. Treating body problems with the plants that suggest them is know as the “Doctrine of Signatures,” an old superstition worldwide in pre-modern times. The plant was also used in treating break-bone fever or dengue fever, another explanation for the common name.

This sturdy plant grows over 5 feet tall on straight stems that are covered with long, spreading hairs.  At the tip of each stem is a large flat-topped cluster of white flower heads that can be over 8 inches across.  Each flower head has about 15 tiny florets, each with a protruding style that gives the group of flowers a fuzzy appearance.  Other species of Eupatoriums found on the Coastal Plain have spreading clusters of white flowers, but the leaves are rounded, sessile or on short petioles. Joe Pye Weed is a close relative. 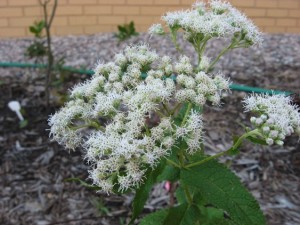 Widespread across Virginia, this native perennial grows in marshes, swamps, bogs, wet pastures, and other moist or wet low grounds. It is a good choice for the back of the perennial border, around the banks of a pond, or in a wildflower garden where it may naturalize.  Very easy to grow, Boneset will spread by forming colonies from abundant rhizomes. For shorter, more bushy growth, the stems can be cut back early in the growing season.

Boneset and all Eupatoriums are attractive to many insects, feeding and provisioning nests during the blooming season, August through October.  Bees collect pollen and feed on the nectar at the base of each style, as do wasps, beetles and butterflies. Predator species such as assassin bugs, paper wasps, bee wolves and tachinid flies are frequent visitors to Boneset for the nectar.  For the services provided by these beneficial insects, the presence of Eupatorium species in the home garden is a necessity.