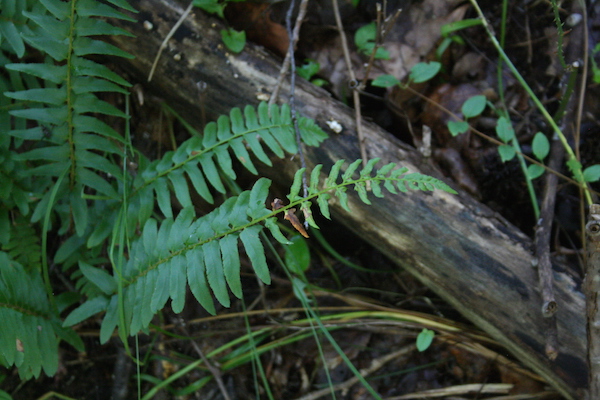 Christmas fern is so named because the leathery fronds are green throughout the winter and have been used as holiday decorations. Children enjoy imagining the leaflets represent Santa’s boots, as each leaflet broadens into a boot-like top where it attaches to the scaly stalk. Few garden plants are so accommodating to growing conditions; while this fern prefers full to part shade and fertile, well-drained soil, the plant is very adaptable and will tolerate dry conditions and some sun. Christmas fern grows in clumps and does not form drifts, but it can be a groundcover or planted along the edges of walkways. In the growing season, fronds are one-two feet tall, but they lie flat on the ground throughout the winter. Always green, they furnish welcome color all year in zones 3 through 9.

Ferns reproduce by alternating spore-producing versus sexual generations. In the spring, some taller, more erect, central fronds will be among the new crop of fronds produced . These fertile fronds have much shorter leaflets on the upper third of the frond, and their undersides carry spores in tiny round clusters. While zillions of spores are produced, only a few find a suitable moist habitat in the surrounding soil where they will grow into tiny green plants that produce eggs and sperm. Successful fertilization produces a new plant which will be of the familiar spore- producing generation.

While this alternation of generations is considered a much more primitive method than reproduction by seeds, it can be very effective; there are often dense colonies of Christmas fern in second-growth woodlands locally because of its rapid dispersal into disturbed areas by wind blown spores.

If winters are harsh, some fronds will show damage, becoming wrinkled and brown; they can be removed, providing space for the silvery fiddleheads that will emerge in early spring. In a garden, new plants should be installed after the last frost, and pine needles, shredded bark or leaf mulch around the plants will help protect them and hold in moisture.

Christmas ferns can be grown indoors, in front of a window with morning sun and afternoon shade. The soil should be kept evenly moist but not over saturated, and regular misting will help increase humidity.