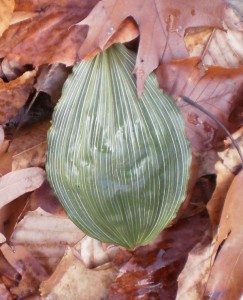 A single leaf above the leaf litter marks the location of this little native orchid in the winter.  When flowers appear in May and June, there is no sign of the leaf.  While not very common in our area, now and then in rich woods a green-and-white-striped, pleated leaf can be seen lying flat on top of dead leaves.  The underside is pale purple.

Like its more common relative, Cranefly Orchid, Tipularia discolor, this plant reverses the  normal cycle of leaves in the summer, and takes advantage of the bare forest trees.  Without the  trees’ heavy leaf cover, more light reaches the ground, and the purplish underside functions to collect the winter light, allowing photosynthesis to occur in the cells on the silvery-green topside. 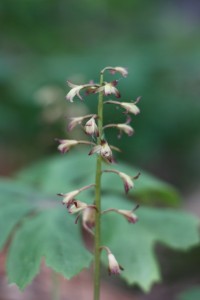 The flowering stalk is less conspicuous than the leaf.  Standing only a foot tall, tiny yellowish flowers are spaced along the stalk.  Various bees visit the flowers which are also self-fertile. The resulting seeds are distributed by the wind.

Putty-root Orchid is more frequent in the Piedmont and Mountain regions of Virginia, but can be found occasionally in our area, growing in calcareous ravines, in woods with beech and maple trees. The plant probably requires association with certain mycorrhizal fungi that enhance the uptake of water and minerals from surrounding soils. This little orchid ranges throughout eastern and central U.S. and Canada, usually at higher elevations.

Clones of this plant can form from the fibrous roots spreading out from the bulbous corms.  The alternate common name “Adam and Eve” refers to the basal corms which are usually in pairs

connected by a rhizome. “Putty-root” refers to a mucilaginous substance which can be removed from the tubers when they are crushed.  When mixed with water, the resulting sticky substance was used to mend broken crockery by early European settlers.  Native Americans made a paste from the roots to treat boils, and a tea was used to treat bronchial troubles.

Aplectrum comes from the Latin, meaning that the flowers are “without spurs.”  The species name hyemale means “winter” and refers to the fact that this orchid has a solitary leaf that persists all winter.