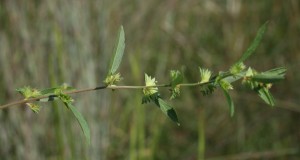 This modest annual is also known as Shortstalk Copperleaf since the leaves are on very short petioles and the alternate leaves often turn reddish in the fall. Stems are simple or branching from base, to 2 feet tall, pubescent. Blooming from June through November, tiny flowers are clustered in the leaf axils, surrounded by bracts with margins shallowly cut into 9-15 lobes. Fruit is a small capsule with 3 seeds. The leaves of Common Three-seeded Mercury (A. rhomboidea) are also lance-shaped, but wider, and the petioles are somewhat longer.

The genus name comes from Greek acklephes, an ancient name for a kind of nettle, referring to the nettle-like appearance of the leaves; gracilens means “slender.”

An introduced invasive look-alike is appearing in gardens this year. Mulberry Weed (Fatuoa villosa) was first reported in Louisiana in 1964, and has since spread throughout the southern states and western coastal states. An erect annual with papery, heart-shaped alternate leaves, the flowers are in dense clusters without true petals. Flowering from mid-summer through the fall, the seeds are abundant and explosively projected. Purchased topsoil can contain the seeds as well as horticulture and nursery stock.

The University of Delaware website recommends discarding the plants in trash, not in compost. A thick layer of mulch should prevent seed germination as well as pre-and post-emergent herbicides.