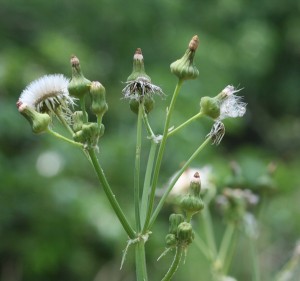 Unlike many members of the Aster Family, the heads of Fireweed lack the distinctive ray petals. They have a cylinder shape with a swollen base, topped with white disk flowers. They are most conspicuous the fall as they fill with copious masses of fine, soft hairs attached to the young fruits. The oblong leaves are alternate, often with sharp teeth or irregular lobes. Fireweed can grow to over 6’ tall, with leaves to 4” wide.

This is an annual weed invading various habitats, including dry woods, marshes, and ditches, blooming all summer, from July through November. The range is from Maine to Minnesota, south to Virginia and Illinois. The common name refers to its preferred habitat, clearings from recently burned areas. Fireweed is found in every county in the state of Virginia.

While neglected by scientific investigators, Fireweed has been used as an astringent , a tonic, and for muscular rheumatism and sciatica. The Algonquin crushed the leaves and rubbed the sap on skin irritated by poison ivy. Terpenes, a large class of organic compounds, have been identified as the plant’s primary chemicals – they are essential oils found in many plants and flowers, and are used widely as natural flavor additives for food, fragrances in perfumes and aromatherapy. Vitamin A is a terpene. Some writers highly recommend the leaves of the plant as desirable food in various preparations. However, deer avoid the plant because it has an undesirable odor and taste when raw.

Erechtites is an ancient name used by Dioscorides. The species name hieraciifolia refers to its leaves which are like those of Hawkweed, genus Hieracium. Also known as Pilewort, the oil of this plant has been used to treat hemorrhoids externally – “Fireweed puts out the fire.”

The common name “Fireweed” is also used for a lovely showy pink wildflower (Epilobium angustifolium) which is native in Virginia only to the mountains but an abundant invader of disturbed areas further north.