Many of the plants that grow in Dyke Marsh are of value to wildlife, providing one or more of the animals’ basic needs: food, water, shelter, and a place to raise their young. This article highlights just a few of these plants that help support wildlife in winter. 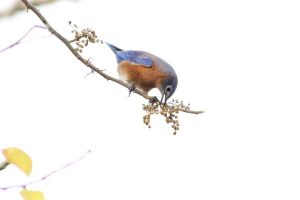 Poison ivy berries are of benefit to this Eastern  bluebird. Photo: Ed Eder

Poison ivy (Toxicodendron radicans). In late summer to early fall, the poison ivy vine produces dense clusters of small, round berry-like fruits that often persist into winter. The fruits are nondescript in color, being variously described as yellowish, whitish, grayish, or greenish. Though toxic to humans, these fruits are a valuable winter food source for mammals (large and small) and birds. More than sixty species of birds have been documented to eat poison ivy berries. Poison ivy berries are a relatively low quality food; fall migrating birds tend to prefer other, higher quality fruits, and thus the poison ivy berries remain to help resident bird species survive the winter.

Virginia creeper (Parthenocissus quinquefolia). The Virginia creeper vine produces loose clusters of small, round, dark blue-purple fruits beginning in early fall. Both the plant’s garnet-red fall foliage and the fruits’ magenta stems help to draw birds’ attention to these berries. As with poison ivy, these berries are toxic to humans (they are high in oxalic acid) but are safely eaten by birds, primarily songbirds, and other wildlife. The plant can also provide cover for birds and small mammals. Birds that eat Virginia creeper berries include chickadees, nuthatches, mockingbirds, finches, flycatchers, tanagers, swallows, vireos, warblers, woodpeckers, and thrushes. 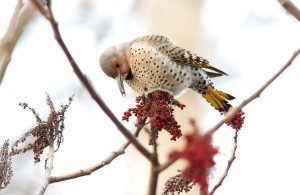 Smooth sumac (Rhus glabra). The small bright red fruits (drupes) of smooth sumac grow in large conical clusters at the tips of the branches. The fruits mature in the early fall and persist well into the winter, turning a rusty shade, and are a winter food source for many animals. According to the U.S. Department of Agriculture’s (USDA) Sumac Plant Fact Sheet, sumac “serves primarily as a winter emergency food for wildlife” including ring-necked pheasant, bobwhite quail, wild turkey, and about 300 species of songbirds. Some mammals also eat the bark and stems. 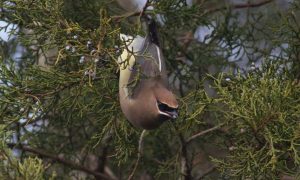 The fruit of the Eastern red cedar is a favorite of cedar waxwings. Photo: Ed Eder

Eastern red cedar (Juniperus virginiana). The female cones of the eastern red cedar, which ripen in September and October, look like berries: round, about ¼ inch in diameter, blue or bluish-purple, and silvery from their waxy coating. These “berries” are very popular with wildlife, most notably the cedar waxwing (Bombycilla cedrorum), which takes its name from its fondness for the fruits of the eastern red cedar. Numerous other birds and mammals also eat these fruits, and the twigs and foliage are eaten by deer. Eastern red cedars also provide shelter and nesting sites for birds such as robins, song sparrows, and mockingbirds.

By Patricia P. Salamone
Reprinted with permission from the Winter 2019 edition of The Marsh Wren, the newsletter of the Friends of Dyke Marsh.