A Facebook friend wrote us to ask for some advice. His garden was newly established with young, small natives. He wanted to know how to keep the weeds from gaining the upper hand before the new plants had a chance mature. Here is a roundup of suggestions from our chapter members. 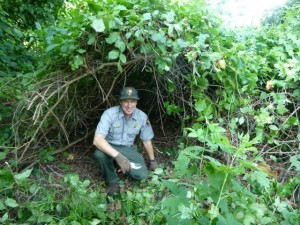 Don’t put off the weeding!

I would say to just pull the weeds as they are visible and identified accurately.  There is a concern about disturbing the soil when pulling weeds, which can allow other weed seeds to germinate.  One way to prevent that is to cut the weeds at soil level and continue doing it until the roots run out of energy and die.  Although the concern about disturbing the soil is valid, I still believe that careful weeding and removing as much soil as possible from the roots at the location where the weed is pulled, is a conscientious method.  Also, the earlier in the season you remove the weeds, the better; weeds will have less time to grow sturdy roots, and less time to rob the soil of its nutrients.  Weeds pulled before they go to seed can be put in the compost pile, or if small enough left on the ground where they were pulled to nurture the soil in their decay – except for Garlic Mustard and English Ivy.

One trick I use is to target one species. Choose ivy for example, and work on that only for the day. You  get a better sense of the scale, more feeling of accomplishment, and will survey the entire area in so doing.
.
~Alan Ford
Chapter President

Go for those annuals that can, over time, take over a garden; stilt grass as an example.  So timing is useful for targeting aggressive non-natives. Consider a visit by experienced native plant gardeners who can offer a little positive re-enforcement and even some suggestions.  Gaining additional confidence will make you an advocate for others thinking about using more natives in their own gardens!

Be persistent and consistent!