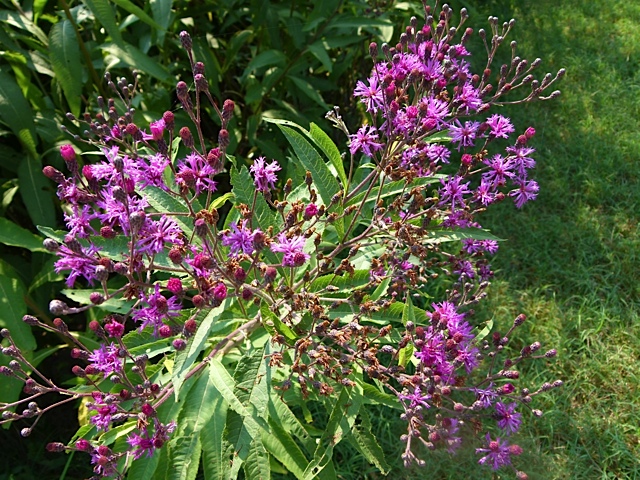 During late summer and early fall, one of the loveliest wildflowers in Northern Virginia is the magnificent New England ironweed. The striking purple flower heads of this graceful member of the composite family add color and interest to damp roadsides, pond and marsh banks, and damp fields. New York ironweed (Vernonia noveboracensis) is the most common species of this genus in our area. The genus name is in honor of William Vernon, an English botanist of the late 1600s and early 1700s who traveled widely in North America. The species name refers to New York where the plant may have been first collected. The range of this species is from Ohio and New York State south to Georgia. According to the Digital Atlas of the Virginia Flora, this species is found in most counties of Virginia.

Ironweed is a member of the Asteraceae or composite family with only disk or tubular flowers.  (Many of the composites such as the daisy have both ray and disk flowers with the “petals” being the ray flowers and the disk flowers make up the center.) The purple tubular disk flowers are found in groups of 20-40 or more a head. Each individual flower has a 5-lobed tubular corolla, 5 stamens, a pistil with and inferior ovary and a slender and thread-like style, and like other composites, the calyx (sepals) is composed of modified, bristle-like structures forming a pappus that in this species is a purple double structure with outer short, narrow scales and inner, long bristles. The fruits are achenes or cypselae which are elongate, cylindrical, ribbed, and hairy. Like other composites, individual heads of flowers are subtended by a cup of leafy bracts that are called an involucre. The involucre of an ironweed flower head is bell-shaped or oblong with individual purplish green bracts (phyllaries)—each with a long bristle-like tip—that are arranged in a woven pattern.  The individual heads are on short stems (peduncles) and are arranged in a flat-topped inflorescence pattern described as a corymbose cyme. The primary pollinators of ironweed are species of butterflies and bees; the fruits are wind dispersed.

The rather coarse 3 to 6 foot-tall stems of New York ironweed may range from rough hairiness to smooth. The alternate leaves are 3 to 10 inches long, lanceolate with serrated edges, and vary in their surface texture, as do the stems. This perennial species has a well-developed root system. The common name ironweed may have come from the toughness of the stem and roots.

American Indians used ironweed for medicinal purposes, making teas from leaves to treat female problems, including relief from childbirth pain, and as a blood tonic. Root teas were used to treat loose teeth and for stomach ulcers and hemorrhaging. 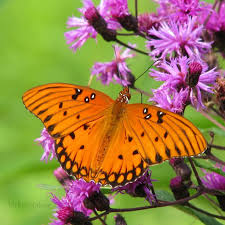 Worldwide, there are more than 500 species of this genus with some shrubby tropical species. In the Northern Virginia area, there are two less common species than the more common New York ironweed.  V. glauca (meaning blue-green) is called broad-leaved ironweed and has leaves broader than V. noveboracensis. The pappus is yellowish and the inflorescence is more loosely branched than in New York. The habitat of V. glauca is more upland woods in the piedmont zones ranging from Pennsylvania to Georgia. V. gigantea is tall ironweed and may be loftier than the other two species of our area. Its inflorescence is looser than New York, but the pappi are purplish. The habitat of this species is moist areas of more mountainous areas from New York to Georgia and, according to the Digital Atlas, is found only in Loudoun and Fauquier counties in Northern Virginia.

Now is the time to enjoy the beauty of this handsome and colorful genus in our area. Ironweed is often associated with other colorful fall composites such as Joe-Pye-weed, golden rods, or various bright yellow sunflower species. The complementary and contrasting colors of these composites help bring color and beauty at the end of summer into early fall.