In the midst of winter in northern Virginia, it is indeed a joy to see green plants.  Many of our ferns and fern 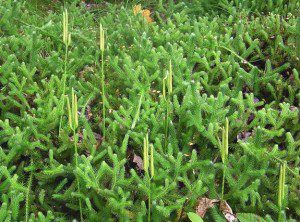 “allies” are evergreen, adding color to our woods in the late fall and winter months. Fern allies include the horsetails, clubmosses, spikemosses, and quillworts. In this article, we will consider the clubmosses or “lycopodiums.”

The common name “clubmoss” is based on the premise that at first glance these plants resemble mosses (mosses are bryophytes and thus, non-vascular plants), and because they often have club-like structures that produce spores. Clubmosses are all perennial evergreen plants with numerous small leaves. Individual plants in many species are connected by horizontal stems that run above ground (runners) or below ground (rhizomes); the actual roots are rather shallow. None of the clubmosses are flowering plants, but all are vascular plants with an interesting strategy of releasing spores at a life stage that few people see—outside of a science lab.

Worldwide, there are 10 to 15 genera and 350 to 400 species of clubmosses. In the northern Virginia counties extending to the Blue Ridge Mountains, there are 12 species of clubmosses or “lycopodiums.” In the past, these were classified in a single genusLycopodium (lyco, wolf; podium, foot) but in the new Flora of Virginia and other modern sources, these twelve species are now placed in six genera, as summarized in the chart below:

Clubmosses or Lycophytes evolved some 410 million years ago as one of the earliest groups of vascular plants (plants with special tissues xylem and phloem to conduct water and food, respectively, in this group of plants).  Some 300-plus million years ago, tree forms of both clubmosses and horsetails along with ferns dominated the great coal swamps of the Carboniferous geological period. Tree forms of tree clubmosses that once reached heights of 100 feet have left an excellent fossil record of the woody tissue of tree forms.

Clubmosses, along with horsetails and ferns, have a primitive reproductive strategy.  In many species of club mosses, club-like projections or “candles” held above the small leaved, conifer-like stems are known as strobili (strobilus, singular form) and have structures called sporangia (sporangium).  In other species, the sporangia are formed on certain leaves of the plant. Each sporangium produces numerous minute spores (lycopodium powder), which will germinate to form a small, thin leafy stage of the plant’s life cycle known as the gametophyte (the stage that produces gametes, eggs, and sperm). In many species of clubmosses, the gametophyte stage develops underground, and symbiotic fungi provide the nutrition for this stage of the plant, which may persist for up to seven years in a dormant form and take up to 15 years to complete the sexual reproductive stage.  In other species, the gametophyte stage may be photosynthetic and develop above ground. This stage of the plant life cycle has both structures—antheridia, producing flagellated sperm; and archegonia, producing eggs.  The sperm swim through a film of water to fertilize the eggs. Fertilized eggs develop into multicellular embryos that form the sporophyte (spore-producing stage of plant)—the stage of the plant that we usually see. Many species of clubmosses also reproduce asexually by underground horizontal stems (rhizomes or runners) or by special structures called gemmae (gemma) that are groups of cells on the tips of the stems that detach and form new plants.

Human uses of club mosses are numerous for medicinal, dyeing, pyrotechnic, and decorative purposes. Club moss spores and teas from plant leaves have been used since ancient times in both American Indian and European cultures.  Medicinal uses included treating urinary tract problems, diarrhea and other digestive tract problems, relieving headaches and skin ailments, and inducing labor in pregnancy.  In some cultures, the spores have been purported to be an aphrodisiac. The spores repel water and have been used as a powder on skin rashes and even on baby bottoms, and to treat wounds. Clubmoss spores once were used by pharmacists in the coating of pills.  In both the Americas and Europe, clubmoss plants were used in dyeing fabrics and other items. The plants and/or spores can be used directly or as a mordant (substance to lock in other dyes) in the dyeing process.  Spores are also very flammable due to their high oil content. They were used in Indian cultures for ceremonial purposes, when medicine men tossed the spores into a fire for a flash of light. The spores ignite with a bright flash of light and were used in flash photography, in stage productions, in fireworks (up until the 1950s), and in chemistry labs.  At one time, club moss plants commonly were used for Christmas decorations. Species in which individual plants are connected by rhizomes or runners were ripped from the ground and used as decorative ropes of greenery. Since clubmosses are slow growing plants, many groups (including VNPS) in the 1990s waged campaigns to discourage this practice.

As you walk in our local woods during the winter months, keep an eye out for this fascinating and attractive group of plants. If you know someone who still uses clubmoss ropes for Christmas decorations, please remind them of the delicate and fascinating life cycle and slow growth of these important plants of the forest floor.

General information on life cycle and uses of clubmosses:http://www.sierrapotomac.org/W_Needham/ClubMoss_040110R090318.htm